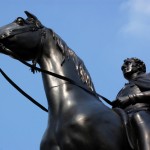 Here’s an example. Suppose we’re selling mobile phones. You have reached the point in the conversation with your prospect that he is interested in buying, however, the phone doesn’t come free with his contract and it doesn’t come in his favourite colour. At this stage, he just needs to be pulled across the line by using the Lincoln close.

“Well sir let’s take one more look at this offer here. It is a shame that the phone isn’t free with your contract, and unfortunately it doesn’t come in your favourite colour. However, it is still relatively cheap compared to other phones, and you agree that black is also a nice colour for a phone. On top of that it has great reception and comes with all of features that you like, such as a high quality camera, email and a “Facebook button.” In my opinion this phone is a great buy. What do you think?”

You can end the duke of wellington close by asking for the sale straight away, but I prefer asking on open question. The reason why I ask an open question at this stage is that your prospect will commit himself to buying anyways, because this is the only logical thing to do. And the best thing is that you are giving him the space to make up his own mind, without being pushy.