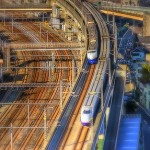 I live just outside the city centre of London. It takes me 15 minutes to get to London bridge station for instance. My office is a little walk away from there so I get on the 6:15 train to make sure I’m always at my office before 7:00 AM.

In the mornings the people on my train are either asleep or they are working. Some people wear a suit, some wear  work boots. But the salesmen and women on my train wear suits and are generally working on their laptops or Blackberries to prepare for the day.

The newspapers today reported that it takes people in London much longer to get to work than it does other people in the rest of the country. On average people travel 45 minutes to get to work (I guess I’m lucky with my connections).

Luckily, people traveling farther in London also earn more. In other words, in London, getting up early pays off! We have to travel farther and longer for better paying jobs, that’s only fair isn’t it? And it makes sense too. In a twenty mile radius, there will usually be twice as many jobs available as in a ten mile radius. So the further you are willing to go, the more opportunity you have of getting a well paid job.

The same is of course true for people who drive to work. If you leave home early you are able to beat the morning rush hour, which means you will always get to your office on time.

My train at 6:15 is fairly empty in comparison to the same train leaving 2 hours later. I’m usually able to get a seat because not many people are required to have such an early start. But is that really it? Sure we may not be required to start early, but if we do, we earn more! The only explanation is mentality and attitude. Some people are just willing to go the extra mile in order to succeed, whereas the majority of people is happy with an average income and an average 9:00 am start.

Which train are you on?

If you have that winning mentality and a strong drive to succeed, I’m sure you won’t mind getting up an hour earlier than other people if it means you’ll be more successful. In sales, more time means more appointments, higher numbers and more commission. Waking up just a little bit earlier always pays off!

So if you want to be successful, if you really want to win in sales, ask yourself this question: are you on the winning train?

One Response to "Are You on the Winning Train?"