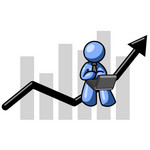 Ever heard of the 80/20 rule in sales? It comes from a law called Pareto’s Principle, which says that in a country, 20 per cent of the population owns 80 per cent of the land. In sales it means that 20 per cent of your sales force accounts for eighty per cent of the sales. Doesn’t sound very efficient does it? Here’s three KPI’s to identify your stars and how to separate the boys from the men.

#1 Numbers
First look at the numbers. Which people consistently hit their targets? Who exceeds, who excels? And who are the under-performers?

#2 Attendance
Second, look at attendance. Identify the people that are always the first ones in and last ones out. Who never takes a sick day? And then make a list of the people who are not always there. Again, look at consistency.

#3 Attitude
This one is incredibly important. Who are the positive people in your office? Who is always eager to help and to learn? Who are the negative people? Identify the whingers and the moaners because they set the mood and negativity spreads like cancer.

Now that we’ve got this information we are going to divide your team in three groups. Grab a blank sheet of paper and make three columns: A,B, and C.

This is your list!  Share this with your superiors if you must, but never with your team.

The trick to beat the rule

The trick to beat the 80/20 rule is to invest your time according to the profit you are making. So which people do you help the most? Who do you invest in? The answer is simple:

“Your job is to make the good ones great, not to resurrect the dead!”

Spend eighty per cent of your people management time with your “A” guys. Teach them everything you know. Take them out for meals. Promote the bigger picture and the career that lies ahead of them if they keep their performance up.

Spend twenty per cent of your people management time on your “B” guys. Tell them what they need to improve on and give them pointers on how to do it. Let them prove to you that they are worthy of your A list!

Column C should be empty. If it isn’t, you need to seriously consider if it is worth employing these people. They are the dead weights that drag the whole team down and eat in to your valuable time. If these people still generate a profit for you, keep them on. But keep them away from the rest of your team as much as possible. Try to replace them with better people and definitely don’t invest any of that oh so precious time in them.