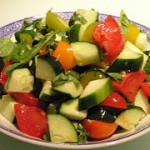 The E.coli death toll has risen to 19 over the past three weeks. According to the World Health Organisation, over 1.2 million people die in a car accident every year. That is almost 3,300 deaths per day caused by car crashes, against one per day through eating dodgy cucumbers.

We don’t fear car crashes but we do fear cucumbers. What’s going on? Why are sales of fruit and veg plummeting all of a sudden? Why do people panic over something that is so relatively insignificant? And more importantly, how can we deal with it in sales?

We are bad risk assessors

I recently read a very interesting book called Freakonomics, by Steven Levitt and Stephen Dubner. Amongst many other things, it looks into why people fear certain threats more than others and how we ascertain the appropriate response to a certain risk. They use the work of a “risk communications” consultant called Peter Sandman. Sandman explains that it is not so much the actual risk that drives people’s behaviour, but more the outrage associated with the threat.

People are very bad at assessing risk. That is why we overreact to a threat if we dread it or if we are outraged by it. Death by cucumber is something that outrages everyone. It’s very scary because we eat cucumbers and tomatoes on a weekly, if not, daily basis. How can something so ordinary kill you all of the sudden? We are outraged by it because it’s new and completely out of our control so we overreact and stop eating cucumbers.

How to beat E.coli

If you’re a fruit and vegetable merchant you must be dying to know if there is anything we can do about this, right? Unfortunately it is not so easy to influence public opinion. Governments are not really helping by banning imports of cucumbers and tomatoes from certain countries. They’re only fueling the panic. People also can’t be reasoned with when it comes to these types of threats, which makes it pretty much impossible to overturn objections.

So in order to beat E.coli you have to be flexible and use it to your advantage. Use the e.coli threat to push sales of alternative vegetables that aren’t affected! “Don’t feel like cucumber salad? Have a delicious potato salad made from home grown 100% e.coli free spuds instead! Or how about: “E-coli? Who likes salad anyways? Fish and chips, only £ 5” If you can’t beat it, adapt and change direction to use it to your advantage! Do this well and you may even sell more than before the outbreak.

8 Responses to "Are your E.coli sales going up?"